A side-event following the High-Level Meeting in New York – 24 September 2019. 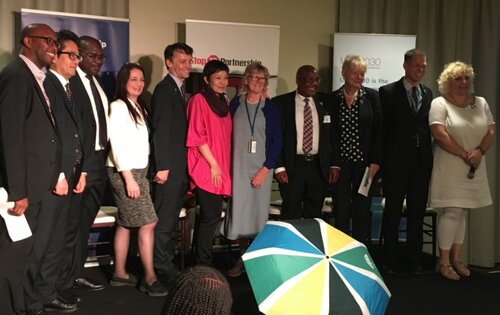 A united front for action on universal health coverage (UHC) across the UHC movement and disease-specific programmes.

Global health leaders, Ministers of Health and Development, Ambassadors and other senior officials, NGO leaders, people affected by AIDS, TB, Malaria and NCDs, and private sector leaders gathered in the UN Headquarters in New York on 24 September 2019. This was the day after the High-Level Meeting (HLM) on UHC, where world leaders agreed to take ambitious actions to institute UHC in their countries.

This ‘Hitting the Targets’ event brought together a range of stakeholders to discuss how to increase the impact of the HLM in countries, and to show a united front for action across the UHC movement and disease-specific programmes.

It was a significant moment for global health as the broader UHC movement and disease-specific programmes shared the same platform for the common goal of achieving UHC.

Professor Ilona Kickbusch Co-chair, UHC2030 said, “It is so great to come together: a UHC platform and disease specific programmes. What a strong message this sends! Let’s continue in this spirit. Every single disease and health issue is part of the UHC Political Declaration and it is just the start. As we build health systems together, whatever issue we work on, we have to do this together.”

Dr. Luiz Henrique Mandetta, Minister of Health, Brazil and incoming Chair of the Stop TB Partnership Board (note: from the end of the upcoming Board meeting in Jakarta in December 2019) and Dr Chilufya Chitalu, MP, Minister of Health of the Republic of Zambia set the tone in the lively addresses, calling for countries, leaders and partners not to drop the ball on commitments and provide the necessary political backing to turn words into actions.

This was the fifth health-themed UN HLM in four years, following the UN HLM on HIV/AIDS (2016), Antimicrobial Resistance (2016), Tuberculosis (2018), Non-communicable Diseases (2018). The dynamic panel discussion provided the ideal opportunity to take stock of the collective impact of previous HLMs and chart the way forward for UHC.

Dr. Aaron Motsoaledi, Chair of the StopTB Partnership Board and Minister of Home Affairs, South Africa said, “From the HLM on TB, it is an uphill battle. People at home do listen when something comes from the UN. An international agenda removes the element of competition for funds back home.”

Dr. Luiz Henrique Mandetta, Minister of Health, Brazil said, "We are establishing a unique health system. We are trying to reorganise our system directly in primary care, and have doubled the investment for PHC centres to be open for longer hours."

H.E. Mr. Vitavas Srivihok, Ambassador and Permanent Representative to Thailand said, "The adoption of the Declaration is the starting point not the finishing line. It means nothing if it is not brought back home and implemented on the ground."

Dr Ren Minghui, Assistant Director-General for HIV/AIDS, TB, malaria and NTDs said, "The political declaration on UHC is unique as it is about a people-centred system to deal with all health issues. It is a landmark in health and development.”

Meirinda Sebayang, a drug-resistant TB & HIV Activist, Indonesia said, "Key infected communities have the right to health, physical & mental. The political declaration for UHC should have an accountability framework with targets so communities can hold governments to account."

Dr. Shannon Hader, Deputy Executive Director, UNAIDS said, “The treatment of HIV has increased dramatically around the world, since setting goals in previous High-Level Meetings on HIV. People took political commitments back home and held governments to account. We have made real progress.”

Dr. Todd Harper, President of the NCD Alliance, Board & CEO, Victoria Cancer Council said, “With high-level commitments, we've seen NCDs recognised as a serious problem globally. But most countries have not delivered on their promises. If we can champion successes this will motivate us.”

Dr Kenneth Staley, Global Malaria Coordinator of the United States President’s Malaria Initiative  and RBM Partnership to End Malaria, said, “Heads of state have made ambitious targets and declarations to eliminate malaria. We have more to do, but partnerships have a critical role to play. Ending malaria is not a technical problem. It's a management, political and financing problem.”

Dr. Yasuyuki Sahara, Senior Assistant Minister for Global Health, Ministry of Health, Labor and Welfare, Japan said, “After this HLM UHC and the Political Declaration, we now need to move from the global to the local to achieve UHC.”