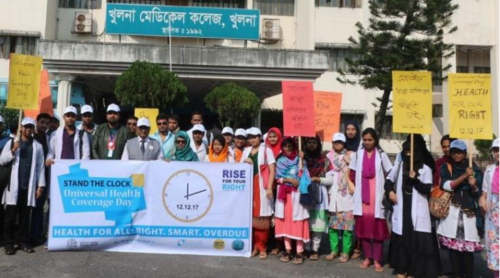 The events brought diverse partners together to explore how to drive progress toward universal health coverage. People demanded political action calling for local and national leaders to take clear steps towards health for all.

Here are some highlights of the 25 events in 23 countries that UHC2030 supported this year.

The Outreach Scout Foundation hosted a high-level panel discussion in Mzuzu called: “Achieving UHC2030 through Health Financing”.  Speakers including a former Presidential Advisor on Health, a leader of the Journalists Association Against AIDS, an Oxfam humanitarian policy lead and a prominent Malawian faith leader. More than 40 people attended, representing Civil Society Organisations (CSOs) from the UHC Coalition and organizations such as Global Hope Mobilization, the Catholic Health Commission and World Vision International.

These stakeholders developed a set of recommendations for the Malawian government as it implements the 2017-2022 Health Sector Strategic Plan, which features UHC as a policy objective. The Malawi News Agency covered the discussion.

The Chagas Disease Alliance, in collaboration with the Iniciar for Global Action Foundation, organized a UHC summit to examine the implementation of UHC policies in Argentina and the ongoing need to equitably improve service delivery, particularly for vulnerable groups. Co-hosts included the Argentine Committee for Health Education (CAESPO), the Argentina Medical Association (AMA) and the Center of Studies for the Development of the Chemical-Pharmaceutical Industry (CEDIQUIFA).

The summit brought together 97 participants, with speakers including a former Minister of Health of Argentina and the President of Argentina’s Senate Health Commission, who presented a bill to officially recognize 12 December as UHC Day in Argentina.

SERAC-Bangladesh organized eight simultaneous rallies across Bangladesh, with 600 youth leaders standing alongside health professionals and policymakers at exactly 12:12 PM on 12 December to demand access to affordable, quality health care for everyone in the country.

This “Stand the Clock for Universal Health Coverage” campaign was livestreamed on social media, allowing additional participants to join virtually. Both The Daily Star and News Hour covered the rallies.

This event also launched the Bangladesh Youth Health Action Network, which aims to channel growing public awareness of UHC into longer-term advocacy gains. Youth delegates agreed to continue expanding this network, in order to better address UHC issues like access to medicines and sexual and reproductive health and rights.

A team of 20 Japanese medical professionals and students produced a video on UHC policies in Japan, which premiered on UHC Day. They also organized a standalone “Youth Dialogue 2017” on the sidelines of the UHC Forum and delivered a Japanese youth statement on UHC as part of the commitments of action ceremony in Tokyo.

UHC Youth Japan will continue to engage young leaders and produce content to sensitize Japanese audiences to the concept of universal health coverage.

IFMSA also hosted a webinar on UHC, with a focus on how medical students can serve as advocates, how primary health care investments can benefit rural populations, and how global surgery access fits into UHC priorities.

IFMSA will build on this campaign in 2018 to host UHC sessions during its Regional and General Assembly meetings, to be hosted in Paraguay, Morocco, Egypt, Austria, South Korea and Canada.

Look at the UHC Coalition’s Storify that captures some of this year’s highlights.

You can also read a comprehensive UHC Day report here.