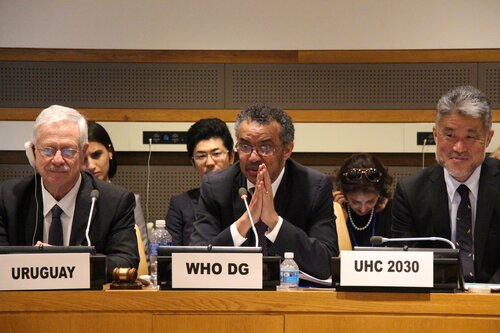 The advancement towards UHC is both technically possible and economically feasible, even for low- and middle-income countries; therefore political commitment is required to make it a reality.

These were two key messages to come out of the UHC2030 high-level event on universal health coverage held on the margins of the High-level Political Forum (HLPF) 2017 in New York on 17 July 2017. The event was co-sponsored by Chile, France, Japan, South Africa, Thailand and Uruguay in co-operation with UHC2030, UN Foundation, Rockefeller Foundation, the Lancet, UHC Coalition, the World Bank Group and the World Health Organization.

The discussion focused on two key themes: UHC as a key driver to achieve healthy lives for all and the resources needed to attain the health-related SDGs.

The event moderator, Dr. Elizabeth Cousens, Deputy Chief Executive Officer of the UN Foundation set the tone by saying, “The SDGS mean that we can embrace a more coherent approach to health.”

In his opening remarks. Dr Tedros Adhanom Ghebreyesus, Director General of WHO, emphasised UHC as a fundamental human right and a foundation for sustainable development that goes beyond health; it encompasses gender equality and poverty reduction. Dr Tedros highlighted three ways in which WHO will support countries to achieve UHC. Firstly, through measuring indicators on progress towards UHC and SDG benchmarks. Secondly, through documenting and sharing best practices for UHC. Thirdly, through the provision of technical assistance to countries, which will include going beyond the health sector to address cross-sectoral needs. “Let’s aim to make UHC a reality for everyone,” he said.

During the keynote address, Dr. Jorge Basso, Minister of Public Health, Uruguay spoke about the results of ten years of health reform in Uruguay, which have ultimately addressed inequities and led to a reduction in poverty. He spoke about the common misunderstanding that poor countries cannot afford UHC. On the contrary UHC represents a good investment for high-, middle- and low-income countries alike but specifically so for resource-constrained countries that need to focus their resources on primary care.

Dr. Takao Toda, UHC2030 Steering Committee Co-Chair, introduced the new UHC2030 Global Compact and explained more about the role of UHC2030 to support countries to achieve UHC through strengthening health systems. He explained that UHC2030 is a movement not an organization, and welcomed everyone to join. "We need to make health systems everyone's business - for all, by all," he said.

Dr. Agnès Soucat, Director of Health Systems Governance of Financing, WHO presented the just-released WHO health SDG price tag data which projects resource needs and the impact on health in low- and middle-income countries from 2016-2030. Evidence shows that UHC is technically possible and economically feasible for most countries. This highlights the key role of political will. Data shows that around 85% of total additional costs of achieving UHC could be met with domestic resources; however 30 countries are still in need of external assistance.  Read more about the SDG price tag here.

Next, a panel session showcased experiences of implementing UHC in countries. Dr Jaime Burrows the Vice Minister of Public Health, Chile shared how health financing reforms including specific efforts to expand access to high-cost treatment, has reduced out of pocket spending and increased financial protection.

Dr François Gave, Counsellor for Sustainable Development, French Permanent Mission to the United Nations spoke about UHC with a focus on health as a human right, which is central to poverty eradication and health security. He also acknowledged the economic impact that UHC can bring if the right investments are made through efforts in prevention and primary health care.

Mr. Michael Myers, Managing Director of the Rockefeller Foundation summarized the meeting, and reminded everyone that, “Equity doesn't happen automatically, we have to pursue it”. He also re-emphasised the multiple benefits from UHC which go beyond health and the value of inclusive partnerships such as UHC2030. “We need to have a great sense of optimism about how UHC is achievable,” he said.

Mr. Hiroshi Minami Ambassador, Deputy Permanent Representative of Japan to the United Nations, emphasizing Japan’s commitment to achieving UHC and SDG3. He thanked everyone for their commitment to the event today and to the UHC movement more broadly and noted that Japan will host the UHC Forum in Tokyo in December this year.

1. UNTV video of the event

3. Cordaid video on Health for All and the short 'teaser' version of the walk

Look at the photos from the event here.

Photo credit and copyright: @WHO