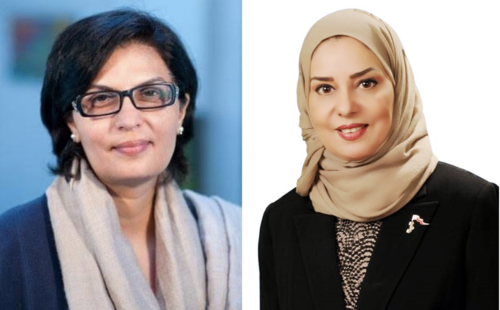 Dr. Sania Nishtar is a member of the Senate of Pakistan. From November 2018 to May 2022, she served as Special Assistant of the Prime Minister of Pakistan and Federal Minister, where she held the Cabinet portfolio on poverty alleviation.

She is the founder of the NGO Heartfile, has received many international awards for her work and is widely published.

Ms. Fawzia bint Abdulla Zainal has presided over the Council of Representatives since 2018 and is the first woman to hold this post in the history of the Kingdom of Bahrain through free and direct elections. She has held several senior and high-ranking roles in the Ministry of Information Affairs in the Kingdom of Bahrain and has worked as a consultant for planning and development in radio and television broadcasting. She has also made a significant contribution to the creation of the media hub for people with disabilities, which was commissioned by the United Nations Office.

Ms. Fawzia bint Abdulla Zainal was a member of the National Committee for Childhood and took part in the task team focused on creating a national plan to advance Bahraini women in decision-making programs. Through her participation the task team was able to influence the Supreme Council for Women's Education and Training Committee.

She also served on the committee that drafted the Child Rights Law and the National Committee for Childhood and established and supervised the first kindergarten in a governmental ministry to serve the Ministry of Information employees.

She has been awarded a Fourth Degree State Medal.

Dr. Sania Nishtar and H.E. Ms. Fawzia bint Abdulla Zainal will join other panel members in advising on opportunities for UHC2030 to ensure follow-up on commitments made in the UHC Political Declaration in 2019, prepare for a successful HLM on UHC in 2023, and sustain high-level momentum on UHC.

Read more about the role of the panel and other members

A critical opportunity to prioritise investment in universal health coverage as essential for successful pandemic prevention, preparedness and response

Realising the right to health requires political will and leadership

A statement from UHC2030's co-chairs following the G20 Summit in...