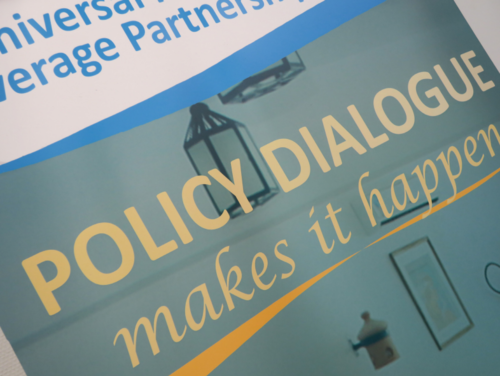 On 21-23 March 2017, in Brussels, the UHC Partnership held its annual inter-country technical gathering. This year’s meeting was particularly momentous as it marked the fifth anniversary of the Partnership which began as a small seven-country programme in 2011/2012 and grew to what it is today.

The event brought together representatives from over 30 ministries of health, WHO country offices, the EU Directorate-General for Development, Luxembourg, other interested donor countries, and academic institutions, to celebrate achievements, share experiences on challenges and discuss innovative solutions at country level with the aim of jointly moving the UHC agenda forward.

The three-day meeting addressed critical health systems issues in the context of UHC and the SDGs. This included the close connection between resilient health systems and security especially in fragile states; the implementation and monitoring of the SDGs at country level; the importance of genuine and strong partnerships at global and at country level to improve aid-effectiveness; and the relevance of a Health-in-All-policies approach involving all sectors to respond to shifting health needs.

The discussions highlighted the unique role that the UHC Partnership is playing for partners like the EU and Luxembourg committed to working closely with WHO in supporting country-led policy dialogue and coordinated support to health systems strengthening towards UHC. As such, the UHC Partnership can be seen as an operational arm of UHC2030, providing a vehicle for partners to take forward the UHC2030 agenda of coordinating HSS efforts in their work at country level.

“We want to give opportunities for a range of actors to work better together, help them coordinate efforts on health system strengthening, facilitate efforts to advocate for policies that lead to equitable policy and use of resources, and create avenues for partners to share knowledge and power. UHC-Partners are frontier soldiers … and the global community is behind them,” said Dr. Agnes Soucat, Director of Health Systems for Governance and Financing at WHO.

About the UHC Partnership

The World Health Organization entered into a collaborative agreement with the European Union and Luxembourg in 2011 to support policy dialogue on national health policies, strategies and plans towards UHC in seven countries. Due to promising initial successes, the EU added a further seven countries in 2013, and Luxembourg came on board with an additional five countries the same year, attracted by the Partnership’s potential. The Partnership thus continued to grow, by adding funding and countries over the years; it currently supports 28 countries with another handful to be added in 2017 already.

The Partnership aims at building country capacities for the development, negotiation, implementation, monitoring and evaluation of robust and comprehensive national health policies, strategies and plans, with a view of promoting universal health coverage, people-centered primary care, and health in all policies.