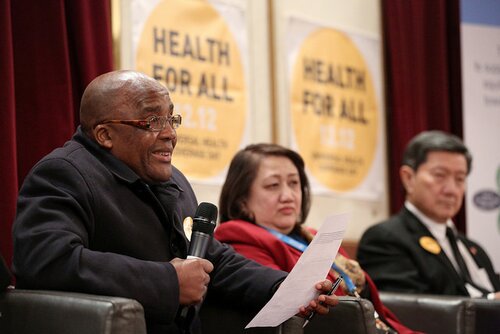 UHC2030 is receiving new support from both countries and development partners: Thailand, South Africa and the Rockefeller Foundation have all pledged their commitment and will become signatories to UHC2030 as we move forward.

These commitments were made during the UHC2030 meeting on 12-13 December in Geneva.

Professor Sakolsatayadorn, Minister of Public Health of Thailand said during the Ministerial closing panel on 13 December, “The attempt of IHP+ to expand its work to UHC2030 is most welcomed. Its governing structure should, however, be a horizontal non-donor driven participatory mechanism. Thailand is happy to get actively involved in its establishment and governance. We need strong collective action to achieve UHC by 2030.”

South Africa has also pledged its commitment to UHC2030, with the Ministry of Health stating that it looks forward to joining the UHC2030 movement and to participating in technical working groups and the initiatives to coordinate efforts to strengthen health systems. For South Africa, it will be a means of accelerating progress towards universal health coverage and achieving the sustainable development goals (SDGs).

Dr. Aaron Motsoaledi, Minister of Health, South Africa speaking at the UHC2030 meeting on 13 December 2016 said, “We in South Africa are very much determined to be part of UHC2030. What we think should happen, not only in South Africa but around the whole world, is to form a big movement like the one that was formed to fight HIV and AIDS.”

“On the third Universal Health Coverage Day, The Rockefeller Foundation is proud to announce a nearly $1.5 million commitment to the International Health Partnership for UHC 2030 – a vital new initiative to drive our collective vision for health for all. This commitment aims to ensure that the promises the world’s leaders have made are matched by equally ambitious actions.”

UHC2030 welcomes these new collaborations and all our existing partners’ efforts to achieve the ultimate goal of UHC through strengthening health systems.