A side event at the UN General Assembly 2019 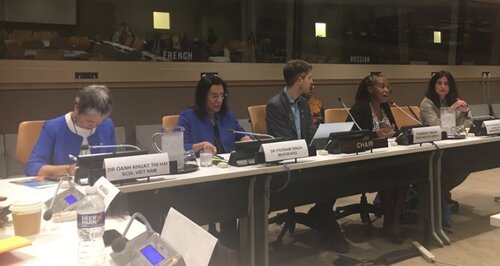 Social participation is vital to secure the human right to health and equitable progress for universal health coverage (UHC). The added value of social participation is to ensure marginalised voices are heard, which strengthens transparency and accountability in health policy processes. Participatory governance mechanisms are therefore vital for responsive, needs-based reforms that leave no one behind in pathways towards UHC.

These were some of the key messages shared during a side-event to the UN High-Level Meeting on UHC, held in New York on 23 September 2019. The event was co-organised by Thailand, WHO, UHC2030 and the Civil Society Engagement Mechanism for UHC2030 and speakers from governments, civil society and the World Health Organization shared their perspectives on why social participation matters, who is at the table and who is not, and how this can be implemented effectively.

Justin Koonin, President of Accon, and representative of the Civil Society Engagement Mechanism for the UHC2030 Steering Committee, moderated the panel discussion and opened the meeting saying that governments are not alone on the road to UHC. “We are here to remind governments that ‘Health for All’ will not happen without us,” he said.

Why does social participation matter?

Nicholas Kojo Alipui, a member from the UN Secretary-General's Independent Accountability Panel (IAP) for Every Woman, Every Child, Every Adolescent reminded everyone of clear evidence which confirms that health outcomes are much better when people participate and engage with health policy processes. People need to drive planning, monitoring and remedial action for positive health outcomes. ‘In the 40 countries we studied, we found that when civil society is more engaged in countries, health outcomes are better’ said Mr Alipui.

Participation and citizen’s voice are core principles of the Sustainable Development Goals, as reflected in target 16.7, to “ensure responsive, inclusive, participatory and representative decision-making at all levels”.  Several Member States have established mechanisms for large-scale population engagement, such as the National Health Assembly in Thailand, the Etats Généraux de la Santé in France, and the Societal Dialogue for Health in Tunisia. Yet these remain the exception, as few countries systematically and meaningfully engage populations, communities and civil society in health sector decision-making processes. Much more needs to be done around the world to ensure meaningful participation and harness better health outcomes to achieve UHC.

Dr. Subandi Sardjoko, Deputy Minister for Human, Social and Cultural Affairs, Indonesia gave three reasons why social participation is important for UHC. It helps identify and engage communities that might otherwise be left behind; it can mobilize and sustain political will; and it can strengthen health policy formulation, transparency and accountability.

Who is at the table and who is not?
Having the intent and will to participate was considered crucial. Oahn Kuat, Executive Director, Centre for Support Community Development Initiatives, Vietnam said, “Participation starts with will. You need to have the will to speak up and push the boundaries if you want your voice to be heard. Technology enables us to participate even without access to the spaces. It all starts with will.”

Other issues raised concerned how to identify and include those who are not the ‘usual suspects’ in participatory processes. “We hear a lot about leave no one behind but who are those left behind? We need to define who the left behind are & ensure they are involved,” said Dr Poonam Singh, WHO Regional Director, South-East Asia Region.

Rosemary Mburu, WACI Health, Kenya, emphasized the importance of the quality of participation, saying, “Investing in health is wealth only if people’s preferences are taken on board.”

How to implement effective social participation?

Country examples raised some interesting questions around how to encourage social participation in genuine ways. Thailand’s success in UHC is largely because of people’s participation, and 50,000 people signed a proposal for UHC that became law. However, sustaining UHC mechanisms for people’s ownership is harder.

Dr Jadej Thammathataree, Deputy Secretary General of the National Health Security Office pointed out that, “Participation is not enough, you need ownership.” In Thailand five out of thirty members of the UHC Board are from civil society, and mechanisms such as public hearings, a complaint channel and call centres and community funding has ensured that people can participate and feel ownership over UHC.

Dr Ahmed Al Mandhari, WHO Regional Director for the Eastern Mediterranean Regional shared the experience of the regional efforts for social participation and gave the example of the Tunisian Societal Dialogue for Health as a model for the region along with Iran’s efforts to link local community participation efforts to national policy-making processes. “These experiences are studied rigorously leading to a new vision ‘For all and by all’, also involving parliamentarians,” he said.

Stephanie Seydoux, French Global Health Ambassador shared the story of France’s long-standing experience with social participation ‘démocratie sanitaire’. “In the 1990s, AIDS was a turning point and the AIDS movement helped to transform the medical system into a system for health where the participation of patients, civil society and other sectors became embedded in law,” she said.

Angela Chaudhuri, Director, Swasti Health Catalyst, India & Social Participation Technical Network made it clear that working with communities cannot be tokenistic, it has to be done over the long-term to build relationships, and it needs to be properly resourced. “For community participation to happen, you need intent, spirit, letter and action,” she said.

Dr Jane Ruth Aceng, Minister of Health, Uganda spoke about finding deliberative ways to ensure community voices are brought up from the local level to the national level and how to ensure political space for CSOs in national policy-making to have participation which is fruitful for both sides. She was asked a question about how to manage dialogue with civil society if it has totally opposing views to the government.  “Whether there are opposing views or not, dialogue is necessary.  In fact, it is even more necessary when views diverge in order to find some common ground and, at times, there is a need to agree to disagree,” said Minister Aceng.

In response to requests from Member States and the recommendations of the Taskforce on WHO-CSO engagement, WHO is developing a handbook jointly with civil society actors and Member State representatives to provide specific best practice guidance on how to effectively and meaningfully engage with populations, civil society, and communities. The draft Handbook on Social Participation for UHC is to be released for consultation on UHC Day this December and will be launched at World Health Assembly in May 2020.