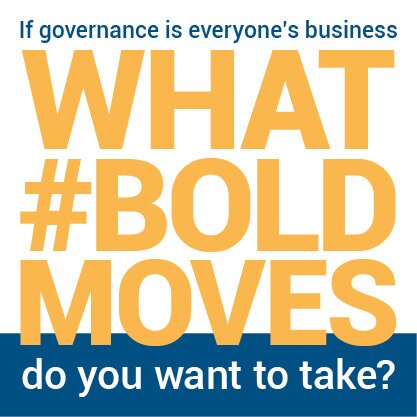 The Health Systems Governance Collaborative is running a Bold Moves campaign to encourage a radical rethink of how we strengthen health systems governance in order to achieve universal health coverage (UHC). The Collaborative is teaming up with other networks to promote the campaign, such as the UHC Partnership. The campaign was launched at the UHC Forum in Tokyo, 2017.

"Where is the sense of urgency? How does it feel, that a 100 million people still live in poverty due to catastrophic health expenditure? Forty years ago in Alma Ata we spoke about 'Health for all' by the year 2000. Today we are still talking about the same issue. We have run out of excuses... we need to gear up... all of us," said a participant from Vietnam during a panel session at the UHC Forum in Tokyo, 12-15 December 2017.

At the formal opening of the Forum in the presence of a large number of global health dignitaries, the tone was set: business as usual no longer suffices.

As the Global Monitoring report on UHC progress demonstrates, progress towards universal health coverage is slow and many inequities persist. At least half of the world’s population lives without proper access to essential health services. Each year, large numbers of households are being pushed into poverty because they must pay for health care out of their own pocket. 800 million people spend at least 10% of their household budget on health expenses.

The details of this report draw attention to the tough political-economic reasons why UHC will be hard to attain by 2030 and why massive efforts are still needed. Hence the #Bold Moves campaign.

The need for a radical rethink is clearer by the day and in response the Health Systems Governance Collaborative and the UHC-Partnership brought the Bold Moves campaign to Tokyo at the UHC Forum 2017.

The Mini-manifesto was warmly welcomed and quickly stirred up some constructive reflection.

If you are interested in taking a Bold Move to change health systems governance for the better: visit the Health Systems Governance Collaborative website and answer the question on the home page: If governance is everyone's business, what bold move do YOU want to take?