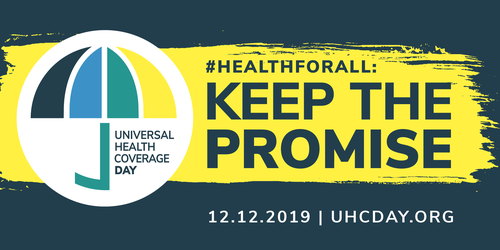 Each year on 12 December, the world celebrates UHC Day to raise awareness of the need for strong and resilient health systems and universal health coverage (UHC).

The gains in service coverage have also come at a major cost to individuals and their families. Incidence of large out-of-pocket spending on health in relation to household consumption or income, increased continuously between 2000 and 2015.

Each year on UHC Day, advocates raise their voices to share the stories of the millions of people still waiting for health care, call on leaders to make bigger and smarter investments in health, and remind the world that health for all is urgently needed.

In September, all UN Member States agreed to a Political Declaration on UHC. Heads of state, at the High-Level Meeting on UHC at the United Nations General Assembly in New York on 23 September 2019, demonstrated strong political vision and commitment to ensuring UHC for the people they serve. In the resulting political declaration, UN Member States recognized the importance of primary health care as “the cornerstone of a sustainable health system for universal health coverage and health-related Sustainable Development Goals”.

Now, UHC advocates will take their turn to send them a message and this year’s UHC Day campaign theme says it loud and clear: Keep the Promise.

We need to see action plans to guarantee health as a right, not a privilege.
We need to see real investment in a society where all people—regardless of gender, race, religion, citizenship, age, ability, sexual orientation, or wealth—can get the quality health care they need and trust without facing financial hardship.
We need to see strong, equitable health systems that truly leave no one behind.

How to get involved

Visit the UHC Day campaign site to learn more and find out how you can take action to support UHC, both on December 12th and throughout the year. You can also learn about events organised by other partners around the world.

On 12 December 2012, the United Nations General Assembly (UNGA) unanimously endorsed a resolution urging countries to accelerate progress toward universal health coverage (UHC) – the idea that everyone, everywhere should have access to quality, affordable health care – as an essential priority for international development.

In 2014, the Universal Health Coverage Coalition started to celebrate 12 December as UHC Day, to commemorate the date on which the UN General Assembly officially recognised the importance of UHC. Since then, the day has become the annual rallying point for the growing global movement for Health for All.