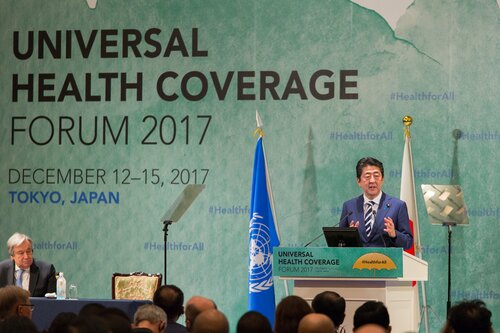 The urgency of accelerating progress towards UHC was the strong message throughout the UHC Forum 2017.

On 12-15 December in Tokyo the Forum, co-organized by the Government of Japan, JICA, UNICEF, the World Bank Group, WHO and UHC2030, brought together high-level participants, including heads of state; ministers of health and finance; parliamentarians from Africa, leaders representing bi-lateral and multi-lateral institutions, civil society, academia and the private sector.

The Forum marked an important milestone to make a further push to mobilise global leaders for UHC.

Prime Minister Abe of Japan, who opened the UHC Forum 2017, confirmed Japan’s leadership in global health, building on the country’s long-standing commitment for embracing successfully UHC since the 1960s: “We will give our all to building a global framework to promote universal health coverage, together with Secretary-General Guterres and other world leaders”. He also announced that his government would commit US$ 2.9 billion for health, nutrition and water and sanitation in support of countries pursuing UHC.

The Tracking Universal Health Coverage: 2017 Global Monitoring Report contains alarming findings that at least half of the world’s population remains without access to quality essential health services and that 800 million people spend at least 10% of their household budget on out-of-pocket expenses for health care. These costs drive almost 100 million people into extreme poverty each year.

“The report makes clear that if we are serious – not just about better health outcomes, but also about ending poverty – we must urgently scale up our efforts on universal health coverage,” said World Bank Group President Dr. Jim Yong Kim. “Investments in health, and more generally investments in people, are critical to build human capital and enable sustainable and inclusive economic growth. But the system is broken: we need a fundamental shift in the way we mobilize resources for health and human capital, especially at the country level. We are working on many fronts to help countries spend more and more effectively on people, and increase their progress towards universal health coverage.”

Dr Tedros Adhanom Ghebreysus, Director General of WHO, said: “It is completely unacceptable that half the world still lacks coverage for the most essential health services. And it is unnecessary. A solution exists: universal health coverage (UHC) allows everyone to obtain the health services they need, when and where they need them, without facing financial hardship.”

UNICEF Executive Director Anthony Lake said: “Without health care, how can children reach their full potential? And without a healthy, productive population, how can societies realise their aspirations? Universal health coverage can help level the playing field for children today, in turn helping them break intergenerational cycles of poverty and poor health tomorrow.”

The Forum made a call to accelerate progress toward UHC and achieve health for all people, whoever they are, wherever they live, by 2030. The Tokyo Declaration states that: “By 2023, the mid-point towards 2030, the world needs to extend essential health coverage to one billion additional people and halve to 50 million the number of people being pushed into extreme poverty by health expenses.”

During the closing session, Rose-Mary Mburu WACI Health Kenya, the spokesperson for the UHC2030 Civil Society Engagement Mechanism (CSEM), made a strong call for a change in the business-as-usual approach to achieving UHC. In the CSEM statement, CSOs reiterated the following principles that would need greater emphasis in guiding national and global efforts:

Other voices echoed concerns about progress being too slow as evidenced in the Tracking Universal Health Coverage: 2017 Global Monitoring Report which provided an opportunity to initiate a multi-stakeholder review of progress.

Talk is finally turning to action

The Forum culminated with a public event which demonstrated that a growing movement is more determined than ever to call for political action. World leaders and youth activists stood together on a stage, in front of an audience chanting “Health for all!” to affirm that we have a moral imperative and historic opportunity to make the right to health a reality (See the event for yourself – photos here and full video here).

Here are just a few of the ways partners committed to take action at the UHC Forum 2017’s closing public event:

The Government of Japan pledged $2.9 billion in support to countries pursuing UHC.

The Ministry of Health of Nigeria committed to providing free primary health care to 8 million more Nigerians in the first quarter of 2018.

A delegation of parliamentarians from the African Parliamentary Forum on Population and Development committed to advocate for UHC based on the needs of the people.

The Gates Foundation announced plans to invest in better measurement of primary health care and to rally parliamentarians behind UHC.

UHC2030 committed to implementing an Advocacy Strategy that will help partners identify effective actions for a community-driven social movement.

The Civil Society Engagement Mechanism for UHC2030 released a statement of principles, pledging to prioritize the most vulnerable and urge a minimum 5% GDP level of health spending by all governments.

The WHO High-level Commission on Non-Communicable Diseases committed to find common ground for the NCD and UHC agendas.

UHC Youth Japan pledged to push their own government and the world to leave no one behind – see below for their video message and other content launched during the Forum.

During the UHC Forum 2017, UHC2030 is proud to have facilitated the organization of more than 40 side events hosted by different partners. The wide-ranging programme demonstrated the extent to which UHC has become a center of gravity for the global health community.

An interactive market place brought together the UHC2030 related initiatives that had a chance to showcase their work (including the launch of the Bold Moves campaign) but also to confirm their commitment to engage in UHC2030 for collaborative work around health systems strengthening. The Forum also featured an all-day “innovation showcase” highlighting innovations driving progress in health systems around the world.

The momentum around UHC was sustained around the world with more than 160 events in 45 countries highlighting the growing global momentum on UHC We can expect the UHC movement to grow, now that UHC Day has become an official UN Day on 12 December each year.

A UN high-level summit on UHC will be held in 2019, requesting WHO and other relevant international organisations to report to the UN General Assembly on improving international coordination and cooperation to address the health needs of the most vulnerable for an inclusive society, through developing and sustaining UHC at the national level.

Accelerating progress towards the health-related SDGs: a look at VNR lab on SDG3

A summary of the Voluntary National Review (VNR) Lab on...

Public hearing on a new instrument to strengthen pandemic prevention, preparedness and response

A statement from UHC2030's co-chairs

Conflicts and humanitarian crises pose existential risks to the...