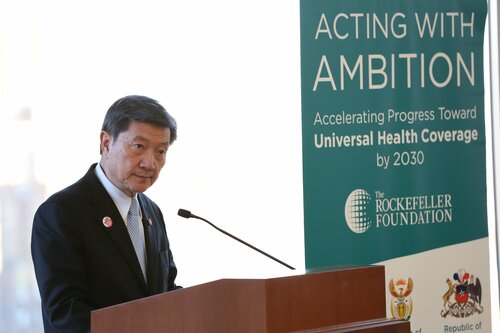 Thailand started its long journey to achieving universal health coverage (UHC) in 1975 when GDP per capita was just US$400, by initially covering the country’s poorest people.

After 27 years of incremental progress and adapting its systems to meet this ultimate health goal, Thailand achieved UHC in 2002 when GDP per capita was US$ 1,900. Evidence shows that the system effectively provides financial protection from the risk of impoverishment, with pro-poor government spending on health and health service use.

Over the years, Thailand has been a champion for UHC both at home and abroad, gaining a global reputation for the political leadership that has driven such notable success.

Around the world, several other countries - such as China, Vietnam, Indonesia, Philippines, South Africa, Ghana and Kenya - are also making good progress towards UHC and are learning from the experience of Thailand and each other in the process.

Across countries and continents, countries are sharing knowledge, experiences and lessons, which contribute to better design and operational capacity development for achieving UHC. According to Professor Piyasakol Sakolsatayadorn, Minister of Public Health for Thailand, “This is the genuine meaning of south-south collaboration.”

The Rockefeller Foundation has supported three regional South-South initiatives across Asia and Africa. The Mekong Basin Disease Surveillance Network (MBDS) was established in 2000 among six countries in Mekong and has contributed to strengthening capacity on disease surveillance, outbreak investigation and capacity to address emerging infectious diseases. Now MBDS has extended to all ten countries in the Association of Southeast Asian Nations (ASEAN).

Secondly, the Asia Pacific Action Alliance on Human Resources for Health (AAAH) was established in 2005 expanding over ten years from 8 to 18 countries across the Asia Pacific Region. The network supported supporting learning and sharing knowledge about strengthening the health workforce.

Thirdly, the Capacity Building Programme (CAP) for UHC network, established in 2012, has convened nearly 100 training workshops and field visits for almost 1,500 participants from more than 20 countries across Asia and Africa. It has also expanded to the ASEAN plus three UHC network.

These three initiatives are pathfinders of effective south-south collaboration. A great deal of trust developed through interactive learning, joint action, common interest and horizontal collegial relationships. What can we learn from this? According to Professor Sakolsatayadorn it is about developing programmes which are country-owned, country-led and country-managed, which are low cost and have high cultural sensitivities and respect for national sovereignty.

As we strive to achieve UHC by 2030, genuine south-south cooperation will play a key role in facilitating peer exchange and learning to head us in the right direction.