Advocacy for UHC in the lead up to the G20. 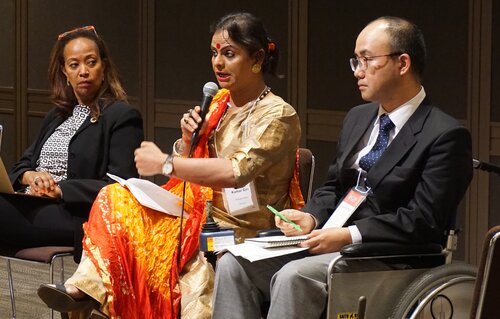 Japan is hosting the G20 for the first time, and the C20 is the summit for civil society members to gather their voices and feed into the G20 outcome documents. In the lead up to this event, civil society members from various fields of work developed key recommendations through a process of dialogue and discussions over three months, which were submitted to Prime Minister Abe on 18 April.

Civil society members advocating for UHC also attended this event. The Japanese government had already announced the UHC was going to be on the G20 agenda, alongside issues such as health, active ageing and health security. The G20 process is therefore a prime opportunity to accelerate action towards the UN High Level Meeting on UHC to be held in September 2019.

On 19 April, as a side event to the C20 Summit, a dialogue between the C20 health working group and the Japanese government took place, inviting high-level officials in charge of the G20 health process from Ministries of Health, Labour and Welfare, Foreign Affairs and Finance. T20 (Think 20) representatives were also invited to exchange views and ideas on the recommendations.

At the onset of the meeting, civil society representatives presented the UHC recommendations, which highlighted the need for donor governments to invest at least 0.7% of their GNI on Official Development Assistance (ODA) with a priority on global health. Civil society also called on all governments to increase equitable public financing, to achieve a target of at least 5% of GDP as government spending on health.

Achieving health for all is a test of countries’ political will to challenge the status quo that leaves behind the poorest, most vulnerable and marginalized communities.  These communities, along with civil society, must be actively involved in policy planning, decision-making, implementation, monitoring and evaluation and accountability. Moreover, any UHC framework must be grounded in a human rights-based approach, prioritize primary health care and ensure gender equality.

Civil society representatives from the UHC2030 CSEM Advisory Group also presented the Key Asks of the UHC Movement prepared by UHC2030 as well as the CSEM Priority Actions. They called for G20 governments to commit to Head of State or Government attendance at the UN High-Level Meeting on UHC and agree indicators to measure progress of UHC in meeting the specific needs of vulnerable and neglected populations, including women, children, adolescents and youth, and those affected by neglected diseases.

Civil society UHC advocates also met with media journalists on 19 April. Here, civil society representatives from the transgender community and people living with HIV/AIDS talked about the difficulties faced by marginalized communities in accessing health care, and the need for governments to commit to UHC that leaves no one behind. During the C20 Summit, a breakout session was organized with a panel that highlighted the needs of marginalized key populations.

Finally, a breakfast policy dialogue session was held with parliamentarians, in which 10 parliamentarians participated both from the leading and opposition parties. Among them was the current Vice Minister of Foreign Affairs, Toshiko Abe who after hearing the civil society recommendation and key asks commented that concrete action and mechanisms to ensure implementation are necessary, not just funding.

Hideki Makihara, who was the former Vice Minister of Health, Labour and Welfare mentioned that he had visited Cote d’Ivoire and Sierra Leone and had worked with African Parliamentarians groups, particularity in forwarding the health agenda within other Japanese government processes such as TICAD, due to be held in August this year in Yokohama. In hearing from the civil society that only 5% of Japanese ODA funding goes to health, he mentioned that he would like to advocate more health funding from the Japanese government.

Mizuho Fukushima, a leader of one of the opposition parties, stated her desire to also work towards increasing Japanese government funding towards health and emphasized that women and girls are central and that their wellbeing is key to achieving better health for all.

Ichiro Aisawa, who hosted the event stressed that we cannot keep asking for increased funds but need to see what kind of vision we can foresee in achieving UHC and how the interventions can be made cost-effective. All parliamentarians expressed their appreciation for active civil society engagement in the G20 processes and in the movement to achieve UHC.

Thank you to Tomoko Fukuda, Advocacy Manager at the Japanese Organization for International Cooperation in Family Planning (JOICFP) for preparing this article.

Help advance UHC Commitment in your country by completing the...