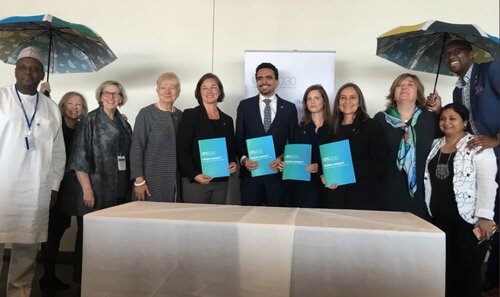 Following the successful United Nations High-Level Meeting (UN HLM) on UHC on UHC on Monday 23 September 2019, the UN General Assembly week culminated with a meeting which UHC2030 organised with partners to discuss how to deliver the highest level political commitments for UHC.

The event, moderated by Ms. Kathy Calvin, President and CEO of the UN Foundation, brought together Ministers, civil society organisations, philanthropic foundations, the private sector and development partners. It aimed to galvanise further joint action in how we take action, track progress of commitments and promote investment in health and social accountability. Experience from Egypt and Georgia provided a powerful example of how political commitment to mobilise and invest domestic resources in health is a key to success. Key messages throughout the discussion highlighted the need for everyone to bring the UHC agenda back home to their countries, to increase advocacy that investing in health reaps rewards and to focus on people, communities and society in order to make a difference.

In opening the meeting, Professor Ilona Kickbusch, UHC2030 Co-Chair, emphasised the importance of sustaining political momentum around the historical consensus on health achieved through the UN HLM on UHC. She called for the implementation of formal Sustainable Development Goal (SDG) follow-up mechanisms to track progress and make UHC a stronger component in national reviews. She also asked for, “Everyone to identify political actors who we need to reach out to for them to take action.”

H.E. Mr. Kwaku Agyeman Manu, Minister of Health (on behalf of the President of the Republic of Ghana) reiterated the importance of mobilising domestic resources for health, highlighting that we need to make primary health care (PHC) functional and of good quality to serve the population. He reminded everyone of the importance of strengthening partnerships between ministers of health and finance. He also called on links between UHC2030 and the Global Action Plan on health and well being to bring all countries and partners together. “Let this HLM UHC not be a moment but a movement!” he said.

HE. Dr. Hala Mostafa El-Sayed Zayed, Minister of Health and Population, Arab Republic of Egypt spoke about what African countries can achieve when they unite around a common goal. She emphasized that countries which achieve UHC by 2030 will not just have better health but also better economic development. Most African countries have now integrated UHC into their health strategies and have translated commitments into domestic resource mobilization. Although there is no single model that can be implemented in all countries, Dr. El-Sayed Zayed said, “Many shifts and adjustments in the way we deliver care, which needs to be people centred, and more efficient use of resources are critical”.

Dr. Mariam Jashi, Chairperson of Education, Science and Culture Committee, Parliament of Georgia / Former Deputy Minister of Labour, Health and Social Affairs, Georgia, reminded the audience that Georgia is able to achieve UHC even in resource-limited settings, through strong political leadership and the mobilization of domestic resources. “Today 90% of citizens are covered by state-funded healthcare,” she said.

Ms. Annette Dixon, Vice President for Human Development, The World Bank Group, highlighted the importance of UHC for eliminating poverty and bringing shared prosperity to everyone. She spoke of the need to focus on the most vulnerable and marginalized populations, reallocating resources towards most impactful and cost-effective interventions. “We need to increase investment in quality, affordable PHC. It's the bedrock of UHC, in all counties,” she said.

During the panel discussion, representatives civil society, philanthropic organisations, development partners and governments shared their perspectives on keeping up momentum and turning political commitment into action for UHC. Key themes to emerge were the important role of parliamentarians, primary health care as a means to deliver UHC, engaging communities, accountability, the right to health and the need for a multi-stakeholder approach including the private sector.

Professor. Dr. Md. H. Millat, Chair of the Advisory Group on Health, Inter-Parliamentarian Union (IPU) spoke about the critical role that parliamentarians play through awareness raising and advocacy to increase the budget for UHC. “National development achievements cannot be sustained without good health,” he said.

Mr. Matthew Rycroft, Permanent Secretary, Department for International Development, United Kingdom spoke about the need to sustain strong political leadership beyond health, which had been visible during many interventions over the course the UN HLM. “We need to be UHC champions not just this week. To make it happen, we need commitment beyond activists,” he said.

Mr. Mark Suzman, Chief Strategy Officer and President, Bill & Melinda Gates Foundation made a strong call for the quality primary health care is fundamental to achieving universal health coverage and the SDGs. “We believe that PHC is the most important single set of interventions for health. There can be no PHC without UHC” he said.

He then called on Eleala Avanitele, a community volunteer from Tuvalu Red Cross Society, who shared her experience of health care in her country, linking it to the climate crisis. Climate change is a key issue affecting people’s health in Tuvalu, through its impact on food crops and plantations. “People are turning to food sources from the shops which has led to an increase in non-communicable diseases. This island is my future. Building trust and relationships must include youth and investment in initiatives that will make a difference,” she said.

Mr. Kevin Watkins, Chief Executive of the Save the Children, spoke about the need to close the gap to ensure that we leave no one behind and urged governments to be accountable for closing these gaps. He said that UHC is about making sure that no child is denied access to health services for a life threatening illness because they are living in a poor country without a strong health system. “Financing is a central part of this story. If you don't commit to close the gaps, don’t sign up. If you sign up, be accountable and focus on resource allocation and efficiency,” he said.

Mr. Gabriel Ferrero, Director General of Sustainable Development Policies, Ministry of Foreign Affairs, European Union and Cooperation of Spain said, “Rights are fundamental to UHC and we must always be aware of this as we take UHC back home to our countries and take action.”

Hon. Dr Jane Ruth Aceng, Minister of Health Uganda said, “We gather and speak with passion and energy but when we get home there are challenges such as implementing PHC, data for decision making and financing. The answer lies with all of us. At the end of the day investing in health pays.”

Ms. Gerda Verburg, Coordinator of the Scaling Up Nutrition (SUN) Movement and Assistant Secretary-General said, “Let's focus on the community level and pay community health workers now. To the private sector, are you promising to focus on people and our society and on the climate?”

Closing and the way forward

Mr. Tamaki Tsukada, Director General for Global Issues, Ministry of Foreign Affairs closed the discussion and spoke about his role to make sure that health attracts high-level political attention. He mentioned that the uphill battle starts now to deliver on commitments. “The international community will have to work collectively to translate political commitment on UHC into action. We expect UHC2030 to play a crucial role in bringing multi-stakeholders together.”

Welcoming new signatories to the UHC2030 Global Compact for UHC

At the end of the event, Dr. Agnes Soucat, Director for Health Systems, Governance and Financing at WHO and Dr. Githinji Gitahi, CEO Amref Health Africa and Co‐Chair of UHC2030 Steering Committee welcomed four new signatories to the UHC2030 global compact for UHC: PAI, Health Age International, U-Care and Wonca.

The event was co-hosted by UHC2030 and the Chair of Group of Friends of UHC and Global Health (GOF). It also benefitted from the participation of a range of partners including: Arab Republic of Egypt, Georgia, the Republic of Ghana, Japan, Kingdom of Saudi Arabia, Thailand, United Kingdom Bill and Melinda Gates Foundation, Global Financing Facility, International Federation of Red Cross and Red Crescent Societies, Inter-Parliamentary Union, Save the Children, UN Foundation The World Bank Group, and the World Health Organization.

Photographs from the event

Leaving no one behind: COVID-19 vaccine equity and universal health coverage in Ghana

As countries roll out COVID-19 vaccination, what are the lessons...